For International Women’s Day 2022, XCMG (SHE:000425) is sharing the inspirational She Power stories of female engineers and their accomplishments, celebrating their audacity, perseverance and full pioneering spirit that shatters the gender bias to recognize, honor and uplift women and girls in the industry. 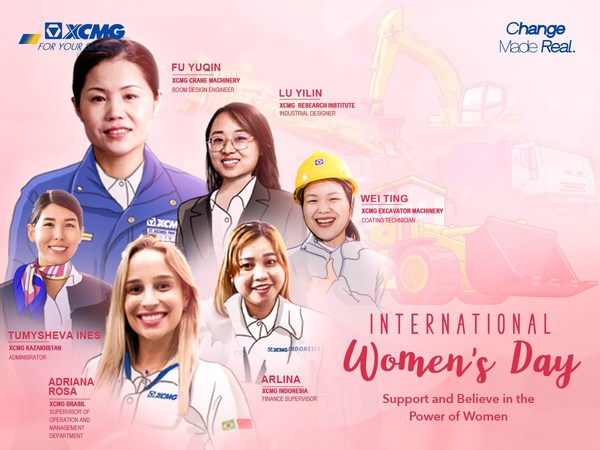 “XCMG has always stressed diversity and gender equality. We’re committed to establishing an inclusive culture and providing opportunity of self achievement and sense of gain to all these talented women working in construction machinery whom we’ve been very honored to have in an industry that’s traditionally been dominated by males,” said Wang Min, CEO and Chairman of XCMG.

Adriana Rosa is the supervisor of the business management department in XCMG Brazil. Having joined the company in 2020, Rosa has extensive knowledge and experience, and dares to take responsibility and initiative in teamwork. She greatly improved the cost accounting accuracy and inventory aging management in three months, took a lead and launched the budget information system in four months as well as developed three internal training courses that are widely praised among employees. Through the promotion mechanism of XCMG, Rosa gives full play to her potential, receiving the Top Team award  of XCMG Brazil in 2021 with her team.

Rosa was recognized as female model of contribution in 2021, she said that thanks to the XCMG platform, she was able to break through herself and unleash so much potential.

Fu Yuqin is a boom design engineer who has worked on developing the super tonnage cranes at the XCMG Crane Research Institute. She has been taking a lead in tackling key R&D problems, and said although boom performance has reached the highest level worldwide, XCMG is constantly seeking continuous breakthroughs in product reliability.

“Technology is evolving all the time, and only by working harder than others can we take a leading position in technological innovation,” said Fu. “XCMG has provided a great platform for engineers and technicians like us, especially in its support of female talent to accomplish our own career pursuits. When my child says proudly on the street that ‘this is the crane my mother has designed,’ I feel a great sense of accomplishment, that the time I spent chasing my dream is now inspiring my child to expect his own.”

“As our industrial design is mostly for supporting products in order to make them better and improve sales, for us, it’s the sense of achievement we feel. For example, when a new product enters the overseas market, winning the recognition of customers brings huge self-satisfaction and sense of gain” said Lu.

“The female employees at XCMG, though only take 15% of total number of XCMG’s staff, are becoming more energetic, we thank them for all their hardworking, courage and wisdom that supported XCMG to reach the yearly revenue milestone of 100 billion yuan, without their contributions, there wouldn’t be the XCMG today.” said Wang. “In the future, XCMG will continue to provide more opportunities for women to breaks through biases and stereotypes to achieve even greater accomplishments.”